In 1986, the Parc del Clot was opened to the public in Barcelona. The park, designed by Daniel Freixas and Vicente Miranda, was built on the site of an old train station.

Though the park may not be a must-see destination (like Gaudi's Park Guell - more on that another day), there are some nice design gestures at play here.

First, you can see they left the remnants of the train station's adjacent factory buildings intact, in order to define separate outdoor rooms. 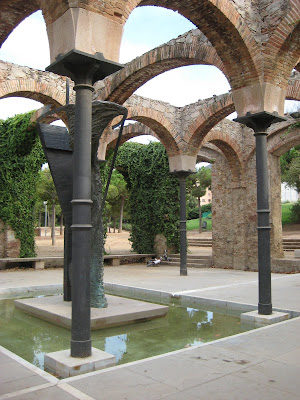 Of course, with the water restrictions typical to a Mediterranean clime, it was not suprising to see that this adorable (though strangely Colonial-Williamsburg-meets-the-Alhambra) pineapple fountain was not running. 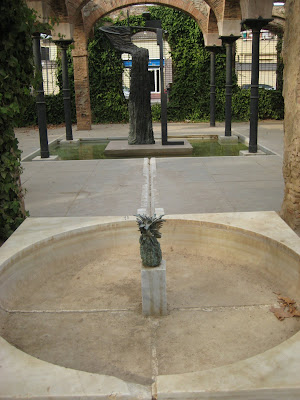 Below, you can see that the Pinus pinea, or stone pines, are aligning with the remnant columns. 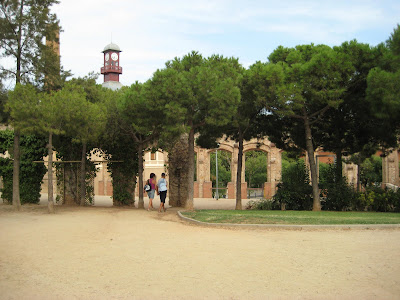 When I was at the park I didn't realize it was built on an old train station, so the emphasis on the linear path below -- which takes you from the more private, passive-use areas of the park to the more active area of playgrounds and basketball courts -- seemed like an overwrought gesture. I still think it's a bit heavy-handed, though it makes more sense to me now, as presumably you are walking on a long-defunct rail line. 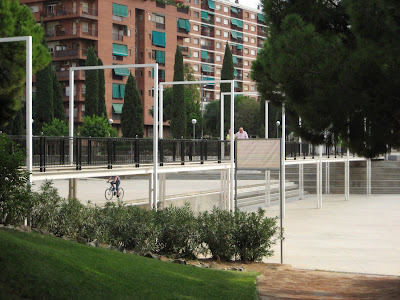 I did like that these white arches also functioned as lights -- a band of lights run inside the frames, which must look quite pretty at night. It's also useful, as this park often has concerts and thus a lot of late night traffic. 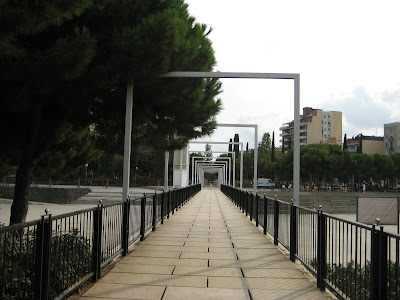 Again, this park is not rewriting principles of landscape design, but has demonstrated its success with its visitorship. The park had people using all the resources the design provided - people were picnicking, playing sports, walking their dogs, using the playgrounds. It was a marked contrast to the new Jean Nouvel park that had opened a kilometer or two down the Aveniguda Diagonal. More on that park in the days to come.

Sidenote -- yes, it's been a long time since the "New York" part of my blog title has been relevant. I am planning on wrapping up with Barcelona/Paris in the next week or two, just in time for fall color!
Posted by Jennifer G. Horn at 4:02 AM

What a wonderful post! How did I miss this park?
Really enjoyed your tour and descriptions,
Cheers! Alice

Wow! great blog. I know you went surfing one past New Years Day, so this is sans wet suit, san boots, gloves hat and so on. Congrats.

how to get rid of cellulite said...

Fairly great write-up. I just Digging your site and desired to say that I’ve really loved studying your blogpost. Any means I’ll be signing as much as your feed and I feel you’ll put up once extra within the near future.