Allow me to introduce my new blogging home: Planted Cloud.

Though I had promised earlier to name my new blog, DC, Plants and Other Stuff, I've decided to blog on a more global scale.  I've been too lucky to travel so much to simply blog about one city's horticultural offerings.  I'm also looking for contributors to post on a monthly level -- if you are interested, please email me.

Thank you, dear reader, for visiting this site.  I've enjoyed blogging NYPAOS more than I ever expected.  I've been neglectful this summer, but hope to make it up to you at my new home.

Fondly,
Jennifer
Posted by Jennifer G. Horn at 9:00 AM 7 comments:

Forgive me (SO MUCH) for not blogging for an entire month.  It's terrible!  Some of you know I am in transition.  I started my own office, Jennifer Horn Landscape Architecture, this year and things are getting quite hectic.  I also have moved to DC which makes this blog title a little inaccurate.

I think I have finally figured out a new title (ultimately, I decided against DC, Plants and Other Stuff) and hope to launch in the next week.  Please be sure to visit me for the link when it finally is ready for viewing.

Jennifer
Posted by Jennifer G. Horn at 7:27 AM 3 comments:

One of the places I absolutely *had* to visit when I was on the Big Island was Mauna Kea, Hawaii's tallest mountain, reaching a height of 13,900' above sea level. Technically, it's the world's biggest mountain, measuring 30,000' from the base, which is at the bottom of the sea, to the tip. 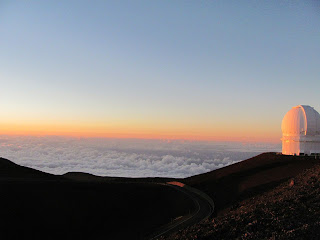 It's also the site of the world's largest astronomical observatory, with 13 telescopes representing 11 different countries. The air in this microclimate is the some of the driest on earth, second only to Antarctica. This, in addition to the absence of cloud cover and light pollution, makes for excellent astronomical viewing conditions. 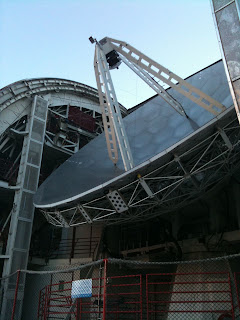 Warned that going to the summit individually is quite difficult (you definitely need four-wheel drive) and reluctant to bring a bunch of winter gear with me from the mainland (it's a chilly 32° at the summit) I signed up for a tour with Mauna Kea Summit Adventures. The tour picked me up at 4pm, and along with about 12 other people, we had a picnic dinner at the visitors center (elevation 9000') before going to the summit for sunset. 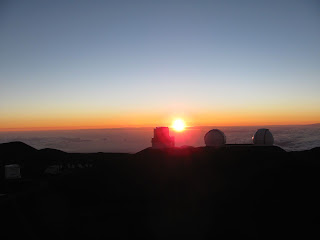 After the sunset, we descended back to 9000' for some stargazing. I saw Saturn and its rings, the Omega Centauri, constellations Sagittarius, Virgo and Leo, as well as the beautiful binary star, Albireo. We also learned a fair amount about night viewing and general astronomy. It was an excellent tour and quite educational. By the time I got back to the hotel, nearing midnight, I was more than a little awestruck by how truly insignificant we are and by the incomprehensible age of the galaxies. (Light years, as a concept, always trips me up. The Omega Centauri is around 15,000 light years away. I see it, but because of its distance, it may not really be there anymore. Only in 15,000 years could someone know if it existed in 2010. Discussing this brain-bending concept with the tour guide, he quipped, 'I think that's why insanity is more common among quantum physicists and astronomers.' ...I can't verify that, but can imagine that the sense of profound insignificance, combined with the fact that - in such a profession - you ask questions that can never be truly answered, may be a bit maddening at times.) 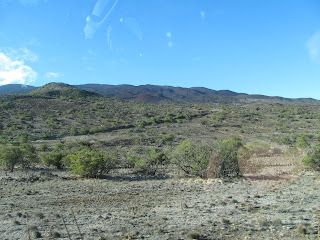 I suppose that's why I prefer plants. There aren't a lot in this biome, but there were enough. I saw the plant below when we stopped for a photo-op at around 11,000'. Does it look familiar to any east coasters? 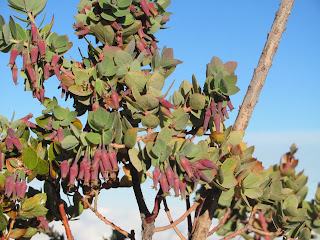 Those bell-shaped flowers are a clue, perhaps. Also maybe the reddish hue to the foliage...But who am I kidding, you read the post title so you know it's a blueberry, or Vaccinium reticulatum. In Hawaii the plant is commonly called the 'ohelo. There are two species of Vaccinium in Hawaii, and both have some subspecies, too, varying slightly among the different Hawaiian islands. V. reticulatum is found in open woodlands and high elevations, while V. calycinum is found in wet, wooded areas. 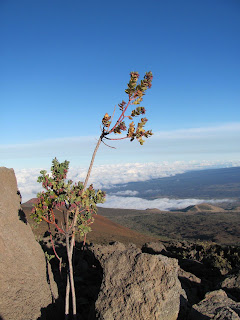 The plant's berries, like our more local V. corymbosum, V. caesariense, or V. angustifolium, make wonderful jams or jellies or can be eaten fresh. They can be picked by visitors and locals but the maximum takeaway is 1 quart when picking in parkland. That's because the plant provides habitat and food to two endemic moths as well as the endangered nene, or Hawaiian goose.
Posted by Jennifer G. Horn at 6:37 AM 2 comments:

On Monday I mentioned the tree ferns that populate the forests near the active volcano at Volcanoes National Park. Today, we'll take a closer look at the Hawaiian tree fern, or Cibotium glaucum, or hapu'u. 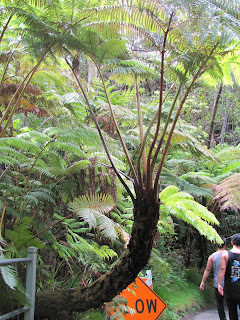 As you can see from the photo above, Cibotium can reach heights up to 8 meters. I encountered this forest - the upper canopy consisting of ohi'a and the understory of hapu'u - while walking to the Thurston Lava Tube in the park. The scale of these beautiful plants is awesome, in the truest sense of the word. 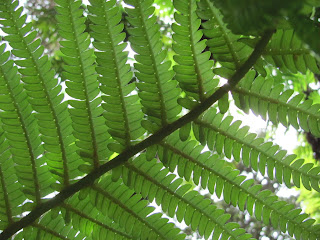 The fronds have a pure, clear green color, with small leaflets. The plant can be propagated by spores - the ones on the youngest fronds are usually most fertile. 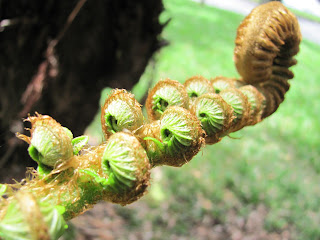 The fiddleheads are actually the size of real fiddle or violin heads. Much like other ferns, frying or boiling the heads is part of the local cuisine. 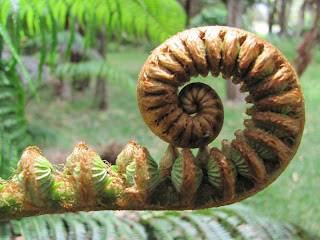 The plants' trunk can be edible as well, but is not very tasty. I read on one site that the trunk is considered "famine food." 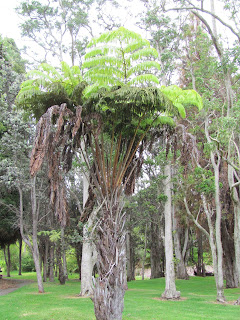 In addition to the edible parts of the plant, the shaggy base of the trunk - or the pulu - has been used as a soft filling for pillows and mattresses. This use reached a peak in the mid 19th century and large swaths of tree fern forests were almost irreparably degraded. Much like I mentioned Monday in regards to Metrosideros, these forests are now more carefully managed.
Posted by Jennifer G. Horn at 6:52 AM 3 comments: